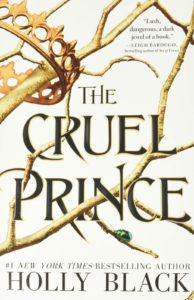 The Cruel Prince by Holly Black

The Cruel Prince is the first book in the Folk of the Air trilogy, followed by The Wicked King and The Queen of Nothing. After the assassination of her parents, Jude is now forced to live in Faerieland under the authority of her parents’ murderer. As Jude, who’s a mortal, tries to navigate her way in a world of Faeries, Cardan and his friends do not give her an easy time. All Jude ever wants is to be a knight in the High Court. When Prince Cardan threatens Jude from being a part of the court, that does not stop her from chasing what she wants.

Reading this book was like escaping reality and entering another dimension. The Cruel Prince is a combination of fantasy and romance, and it was impossible to put the book down. I personally liked how the book didn’t revolve entirely around romance and focused more on the action without having an imbalance of both. I highly suggest those who like fantasy give this book a chance because of its unexpected plot, and it will leave you wanting more. Not only that, but the overall writing of the story depicted Jude’s perspective and emotions incredibly well. The Folk of the Air series is definitely worth reading!