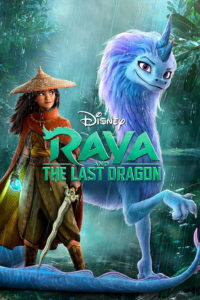 Raya and the Last Dragon

What once was known as Kumandra is now divided into five lands; Heart, Tail, Talon, Spine, and Fang. Humans and dragons lived together peacefully in the kingdom of Kumandra until the Druun conquered and turned every human and dragon into stone. Sisu, the last dragon, used her power to create a gem that eradicated the Druun and brought the humans back while the dragons remained stone. Raya makes the mistake of trusting Namaari, resulting in betrayal, regret, and the reappearance of the Druun. It’s up to Raya to save her kingdom, but how will she do it if she can’t trust anyone?

Raya is Disney’s first Southeast-Asian princess and an unforgettable one as well. This movie follows Raya’s journey to find Sisu and the missing dragon gem pieces, and it is full of adventure! The storyline and plot of “Raya and the Last Dragon” are incredible! I would recommend this movie to anyone who is a Disney fan or likes movies packed with excitement. What makes the characters relatable is their having flaws and fixing their mistakes. Raya and Namaari’s character arcs are super well-written; they feel like real human beings. The main character, Raya, also learns some important lessons along the way.