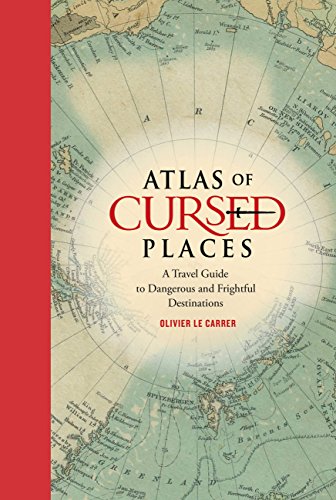 The Atlas of Cursed Places by Olivier Le Carrier
Adult
142 pages
Travel Literature/Mystery
Find it as a book here!

In conjunction with this week’s Summer Reading Club subtheme of Travel and Exploration, it seemed fitting to highlight this fascinating atlas of globally “cursed” locations!

Olivier Le Carrier takes readers through an extensive compilation of 40 different cursed locations around the globe, each with its own collection of ominous and suspicious activity. Both frightening and educational, this collection provides historical information and captivating tales from each geographical landmark.

In contrast to some other fictional works of mystery literature, the fact that this text is documentative in nature and catalogues actual events that have occurred only adds to its fear factor! Some examples include:

Overall, I was really impressed with this book! Initially, I had expected it to be over-the-top and unrealistic, but I was pleasantly surprised by its educational value and historical tone. Even more so, the fact that Le Carrier has successfully broken down the stories of so many different locations into short yet captivating summaries really helped me to remain engaged the whole time!

Thinking back, I think my favorite cursed location was probably Poveglia, the Island of Death in Italy. Being Italian myself, I am always fascinated by the country’s dynamic history and enjoy learning as much as I can, whether it be good or bad. More than anything, I am happy to report that this summary certainly delivered an appropriate level of spookiness! Later used as a location for a psychiatric hospital and old age home, this abandoned island off the coast is also said to house the bodies of over 160,000 plague victims, criminals, and more from days passed. Though these suspicions have never been confirmed (partly due to the Venetian government’s tightly sealed records), those who worked and resided on the island years later often reported having their minds “disturbed”, especially the director of the former hospital who reportedly went mad before passing away under unfavorable circumstances.

Moreover, I really enjoyed the excellent context that the foreword provides for the book, and how straightforward the author is. Though some of these locations are reportedly mysterious for mythical or paranormal reasons, Le Carrier ensures he mentions that there are actually three reasons that a place may be designated as “cursed”. These are: locations that are plagued with paranormal or mystical phenomena, places that bring difficulty upon the lives of their residents for entirely natural reasons (ie. volcanoes, climate, etc.), and locations that have been rendered uninhabitable as a result of human activity.

Despite coming into this book with a particular idea of what it would be comprised of, I found it really refreshing to be able to consider this subject matter from so many perspectives! It certainly delivered in every respect, and I know this is a book all readers will enjoy!