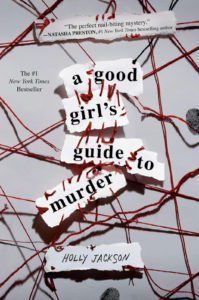 A Good Girl’s Guide to Murder by Holly Jackson

It happened five years ago; Sal Singh murdered his girlfriend, Andie Bell, then took his own life shortly after. That’s what they all say. Now that Pippa Fitz-Amobi is in her senior year of high school, she’s decided to investigate the Andie and Sal incident for her capstone project. Pip is determined to find out the truth about what happened to Sal and Andie. Someone out there doesn’t want Pip to solve the case, threatening her to stop and is putting her life in danger. This investigation might not be as black and white as it seems. What if the story they’ve been told about Andie and Sal has been wrong all along?

I never understood why this book was so popular until I read it myself, but I understand why now. Not only was Pip on a mission to find out the killer of Andie and Sal, but she also went on a journey to discover who she was deep down. To anyone looking for a murder mystery with a twist, this book is the right one for you, but I would also recommend this book to those who aren’t big fans of mystery as well. I did not expect so much suspense in one book because there were a lot of twists and turns! The ending was not what I expected, but I loved this book nonetheless!