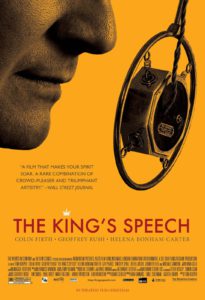 Prince Albert, the second son of King George V, lives with a stammer, yet Britain was in wartime, and people are counting on their King’s words to inspire them. Albert’s wife Elizabeth encourages him to see a therapist named Lionel, who does not use traditional treatments with his patients. Will Lionel fail like many therapists before him? And if he were to succeed, how will he achieve it?

Adapted from authentic history, the less known side of this English King is introduced to people around the world. As it turns out, the King inspired more than just people in England. What intrigues me is that the psychological factors may have more influence on the King’s illness than factors of a mechanical nature. The dialogues were interesting and elegant. Elizabeth’s support to her husband is noble. I recommend this movie to people interested in psychology and drama plays.