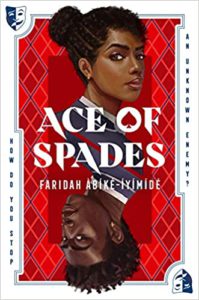 Ace of Spades by Faridah Àbíké-Íyímídé

After being elected Head Prefect and Senior Prefect, the senior year seems to be off to a good start for Chiamaka Adebayo and Devon Richards. However, everything comes crashing down when an anonymous person, who goes by Aces, reveals secrets about them one by one, slowly ruining their lives. Chiamaka and Devon are determined to stop Aces from doing whatever it is they’re doing that threatens both of their futures. They want answers; they want to know who and why. As they work together to expose the person (or people) behind Aces, they begin to uncover the shady past Niveus Private Academy has hidden for many years.

I never knew I needed to read this book until I read this book! It was hard for me to believe this was the author’s debut novel because it was amazing! I was blown away by the whole story, and it kept me fully engaged the entire time. Something I loved about this book was the main characters because of how different their personalities were from each other, yet they were able to work together super well…most of the time. This book is perfect for readers who enjoy fast-paced books that feature some dark academia. It’s a great book for when you want to set the mood with something exciting and mysterious.