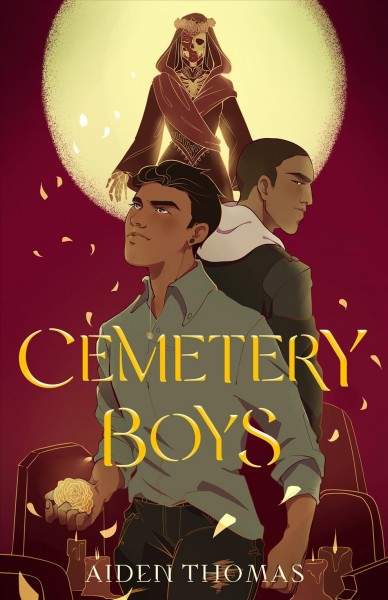 Finally fed up with waiting for acknowledgement, he and his cousin Maritza sneak into the church a few days before Dia de los muertos. They perform Yadriel’s quinces ceremony and call upon Lady Death to recognize him as a brujo.

Things begin to go awry almost immediately. As they’re leaving the church Yadriel and Maritza’s cousin Miguel is murdered. Shortly after, they find the ghost of a popular boy from their school, Julian Diaz.

While Julian’s ghost cheerfully tags along, Yadriel and Maritza set out to discover who murdered Miguel and Julian.

Cemetery Boys has been in my TBR pile ever since it came out. On the surface it’s a fairly standard YA novel. That said, I was so absorbed in the plot that I read it in one sitting.

What makes Cemetery Boys really stand out from the crowd is the uniqueness of it’s characters and setting. Yadriel’s Latinx community is filled with language, colours, music, food, magic, and characters from an amazingly diverse array of backgrounds.

Above all, the main characters are very engaging. I found myself thinking about them for days after I had finished the novel.  Yadriel was instantly likeable and very endearing. His cousin Maritza, as the sole vegan bruja, was confident and sassy and amazing.

Most refreshingly, Julian’s bad boy reputation turns out to be the product of racism and stereotyping rather than actual “badness”. The relationship that builds between him and Yadriel is one of the healthiest I’ve read in a YA novel.

Highly recommended for teens or adults who enjoy a good YA fantasy. Equally satisfying for those who are interested in reading a diverse story with LGBTQ+ characters.