Hello everyone, and welcome to week 6 of the Summer Reading Club! This week’s theme is History’s Mysteries, and we are excited to delve into the Seven Wonders of the Ancient World with all of you!

This week we have two fun pieces of content for you!

The Seven Wonders of the Ancient World Facts

The Great Pyramid of Giza is both the largest and the oldest of the pyramids that make up the necropolis near Cairo. It was built around roughly 2560 BC.

It has been rumoured that The Hanging Gardens of Babylon were built by Nebuchadnezzar II as an attempt to comfort his wife, Amytis, who was missing the plant life of her homeland of Media.

The Temple of Artemis was reconstructed three separate times. It’s first demise was by flood in 7th century BC, and its reconstruction was burned down by the fame-hungry Herostratus around 356 BC. The third version was the largest, measuring over 450 feet long, 225 feet wide and 60 feet high with 127+ columns. However, it was ultimately destroyed again as a result of Gothic raids in roughly AD 268.

The Statue of Zeus at Olympia was created in 432 BC and is made out of ivory and gold-plated bronze. It stands over 12 meters tall.

The Mausoleum at Halicarnassus is the final resting place of Mausolos of Caria, a 4th-century BC satrap (regional governor) and his sister/wife Artemisia.

The Colossus of Rhodes was built in roughly 290 BC and overlooked the harbor on the Greek island of Rhodes. It was more than 30 meters tall and stood for only 56 years before an earthquake brought it to the ground. 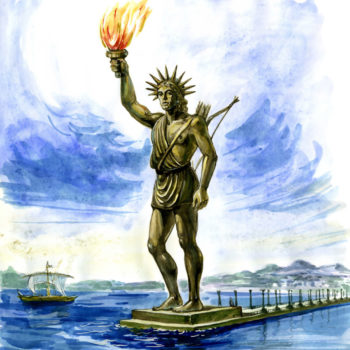 The Lighthouse of Alexandria was built on the island of Pharos between 270-247 BC. It stood around 130 meters tall and was commissioned by Ptolemy I (a Macedonian successor of Alexander the Great) to help guide sailors into Alexandria’s harbor.

The Great Pyramid of Giza

The Hanging Gardens of Babylon

The Temple of Artemis at Ephesus

The Statue of Zeus at Olympia

The Mausoleum at Halicarnassus

The Colossus of Rhodes

The Lighthouse of Alexandria